Lose the Laggards and the Average Goes Up 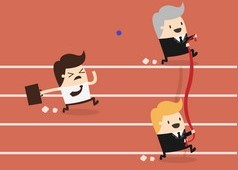 From our September 7, 2020 newsletter

I wrote monthly articles about real estate as a freelance journalist for the Denver Post from early 2007 to mid-2010. Those 42-odd articles can still be found online here.

In that role and in previous newspaper gigs, I developed great empathy for journalists, especially print reporters. They’re often asked to tell complex stories in relatively few words under a lot of deadline pressure.

Those dynamics continue today. So I am not inclined to criticize the writers of stories with headlines like this one:

That one is from a media outlet I respect greatly and listen to several hours per day: Colorado Public Radio. But similar headlines appeared in other find local outlets including the Denver Post, 9News, and Westword.

Sounds like things are rocking, right? By some measures, they are. Volume (the number or sales) hit an all-time high in July. But certainly that was due largely to pent-up demand. Volume was very low from April through June due to the pandemic.

Reports of the average 9.9 percent year-over-year price increase are overstated and frankly, misleading.  How so?  Check this explanation by Lon Welsh, co-founder of my employing brokerage, Your Castle Realty.

But is it meaningful? Not necessarily. The increase in “average” sale price is driven by a shift in the mix of models. Next month it may be different. A return to the normal 50/50 vehicle split would bring a reversion to the mean of $30,000.

Something analogous has been happening in Denver real estate. We’ve seen a drop-off in the sale of the “economy model”—lower priced homes. It’s not that people don’t want entry-level homes. It's just that fewer of their owners want to sell. The re-mix was substantial enough to cause a 9.9 average price increase in July, compared to last year.

Now suppose you’re a reporter and you are handed the latest monthly sales figures from the Denver Metro Association of Realtors. You’ve got an hour to scan the data and… holy crow!  July’s average price just topped $600,000. How does that compare to July of last year?  Holy cannoli!  It's up 9.9 percent!  Your headline-writing colleague rounds it up to “Nearly 10 percent.” You hit Publish and it’s on to your 4 o’clock Zoom call.

I am not here to defend journalists’ instinct to sensationalize. A phone call or two to some smart folks like Mr. Welsh would have clarified the cause of the July price jump. But in a click-bait world, the resulting headline might have grabbed little attention.

The decade since I was a journalist clearly has brought another kind of re-mix in terms of relevant, reliable news sources. Much more content comes from non-journalist insiders reporting and commenting on their industries and fields of expertise.

This is good and bad. Who would ever doubt that major players and brilliant data crunchers like my boss would have a firm grip on industry trends? In the old days (like 2005) Lon Welsh would have been considered a “source” by journalists at the Denver Post. He is still that, but more significantly he is his own publisher with a megaphone perhaps bigger than the newspaper’s. So important stories can go out without the need for a middleman.

But there is an obvious downside, related not necessarily to Your Castle on YouTube or Denver real estate, but certainly pertinent to media in general.  Who would ever doubt that commentators and insiders sometimes slant or distort facts to suit their purposes?  In the old days, facts were more widely believed because they appeared under the banner of the New York Times, or spoken by Walter Cronkite.

I was high school graduate entering college in 1974. President Nixon had just resigned and the Watergate scandal was fresh on the minds of Americans. Journalists were heroes, and movies and books were produced not just by them, but about them. I planned to study journalism, having written a few stories for my high school paper. So did a few thousand other incoming freshmen. Journalism was the single most popular major at the University of Wisconsin-Madison.

How things change. Professional, objective journalism has been in decline since, I’d say, oh about 1974. In my opinion that is a calamity not well understood. But I believe it accounts for much of the hate and anger and divisiveness that prevails in the U.S. and beyond.

Real estate agents and all marketers, meanwhile, are pushed very hard to produce their own media content. A print newsletter like this is a kind of a dinosaur. Now it’s all about video distributed on social media. I’ve spent a good part of the year trying to learn video production.  But producing aa commentary like this, which takes maybe three hours for print, takes me about three times that on video. I’m learning.