Christmas Riddles: How Do You Lift A Frozen Car? 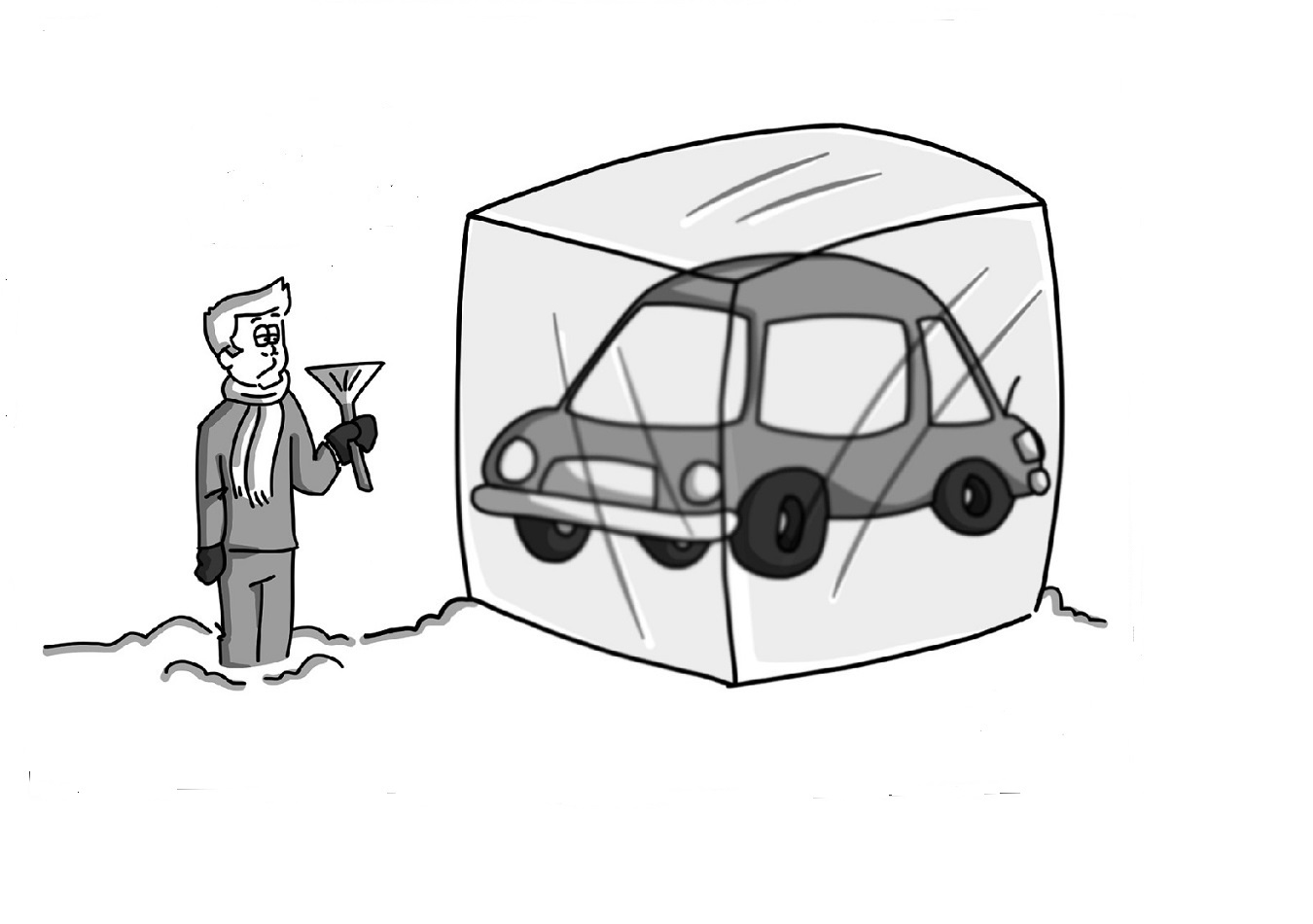 What does Miley Cyrus have at Christmas? Twerky!

Why was the snowman looking through the carrots? He was picking his nose!

What do monkeys sing at Christmas? Jungle bells!

What did Adam say the day before Christmas? "It's Christmas, Eve!"

What did the beaver say to the Christmas Tree? Nice gnawing you!

What happened to the man who stole an Advent Calendar? He got 25 days!

What do you call a bunch of chess players bragging about their games in a hotel lobby? Chess nuts boasting in an open foyer!

What does Santa suffer from if he gets stuck in a chimney? Claus-trophobia!

What happened to the man who stole an Advent Calendar? He got 25 days!

Who delivers presents to baby sharks at Christmas? Santa Jaws!

What do they sing at a snowman's birthday party? Freeze a jolly good fellow!

What do Santa's little helpers learn at school? The elf-abet!

What kind of motorbike does Santa ride? A Holly Davidson!

What did Santa do when he went speed dating? He pulled a cracker!

Why was the turkey in the pop group? Because he was the only one with drumsticks!

What do you get if you cross Santa with a duck? A Christmas Quacker!

Why does Santa have three gardens? So he can 'ho ho ho'!

What is the best Christmas present in the world? A broken drum, you just can't beat it!

What do snowmen wear on their heads? Ice caps!

What did Adam say the day before Christmas? "It's Christmas, Eve!"

What did the stamp say to the Christmas card? Stick with me and we'll go places!

Why did no one bid for Rudolph and Blitzen on eBay? Because they were two deer!

What does the Queen call her Christmas Broadcast? The One Show!

Why don't you ever see Santa in hospital? Because he has private elf care!

How did Mary and Joseph know Jesus' weight when he was born? They had a weigh in a manger!

Why is it getting harder to buy Advent calendars? Their days are numbered!

How did Scrooge win the football game? The ghost of Christmas passed!

What do angry mice send to each other at Christmas? Cross-mouse cards!

What does Santa do with out of shape elves? Sends them to an elf Farm.

Why did Santa's helper see the doctor? Because he had a low "elf" esteem!

Who hides in the bakery at Christmas? A mince spy!

How do snowmen get around? They ride an icicle!

What do snowmen have for breakfast? Snowflakes!

What does Santa do when his elves misbehave? He gives them the sack!

What did Santa say to the smoker? Please don't smoke, it's bad for my elf!

What do you get if you eat Christmas decorations? Tinsilitis!

Which famous playwright was terrified of Christmas? Noël Coward!

What carol is heard in the desert? 'O camel ye faithful!'

How many letters are in the Christmas alphabet? Only 25, there’s no L!

What do reindeer hang on their Christmas trees? Horn-aments!

Why are Christmas trees so bad at sewing? They always drop their needles!

How does Christmas Day end? With the letter Y!

What happened to the turkey at Christmas? It got gobbled!

When is a boat just like snow? When it’s adrift!

Why did the turkey cross the road? Because it was the chicken’s day off!

What do you get if you cross Santa with a detective? Santa Clues!

What is Santa’s favourite place to deliver presents? Idaho-ho-ho!

What do you call buying a piano for the holidays? Christmas Chopin!

What’s a child’s favourite king at Christmas? A stoc-king!

Why couldn’t the skeleton go to the Christmas Party? Because he had no body to go with!

How does Darth Vader enjoy his Christmas Turkey? On the dark side!

Who do Santa’s helpers call when they’re ill? The National Elf Service!

Why did Scrooge keep a pet lamb? Because it would say, “Baaaaahh humbug!”

Who is a Christmas tree's favorite singer? Spruce Springsteen!

What cars do elves drive? Toyotas!

What do reindeer say before they tell a joke? This one will sleigh you!

How do you lift a frozen car? With a Jack Frost!

Which holiday mascot has the least spare change? St. Nickel-less!

What would you call an elf who just has won the lottery? Welfy!

How did the bauble get addicted to Christmas? He was hooked on trees his whole life!

What do you call an obnoxious reindeer? Rude-olph!

Why are Christmas trees so fond of the past? Because the present's beneath them!

What do you call a kid who doesn't believe in Santa? A rebel without a Claus!

Why does Santa go down the chimney? Because it soots him!

What did Mrs. Claus say to Santa Claus when she looked up in the sky? Looks like rain, dear!

Why did Santa get a parking ticket on Christmas Eve? He left his sleigh in a snow parking zone!

What do you call Santa living at the South Pole? A lost clause!

What part of the body do you only see during Christmas? Mistletoe!

What do the elves cook with in the kitchen? Utinsels!

What's the difference between Santa Clause and a knight? One slays a dragon, the other drags a sleigh!

What do you call cutting down a Christmas tree? Christmas chopping!

Where do Santa and his reindeer go to get hot chocolate while flying in the sky? Star-bucks.

What do sheep say at Christmas? A Merry Christmas to Ewe!

Why is everyone so thirsty at the north pole? There's o well, no well!

Which football team did the baby Jesus support? Manger-ster United!

What do you get if you cross a Christmas tree with an apple? A pineapple!

Why is winter a snowman's favourite time of year? Because they can camouflage!

What do you get if you cross a bell with a skunk? Jingle Smells!

What do you get when you cross a deer with rain? A reindeer!

What's worse than Rudolph with a runny nose? Frosty the Snowman with a hot flush!

What is the most competitive season? Win-ter!

What type of key do you need for a Nativity play? A don-key!

Why don't penguins fly? Because they're not tall enough to be pilots!

What did the Christmas tree say to the ornament? Quit hanging around!

Why wouldn't the cat climb the Christmas tree? It was afraid of the bark.

Why don’t Southern Rail train guards share advent calendars? They want to open the doors themselves!

What’s the difference between Ryanair and Santa? Santa flies at least once a year!

Kim Jong Un will play Santa this year in the South’s annual pantomime. He said he fancied a Korea change!

Why was the planned Ryanair TV documentary scrapped? They were unable to air a pilot!

Which TV Christmas special is being filmed in Brussels this year? Deal Or No Deal!

Theresa May has asked Santa for a home makeover this year. First thing on the list was a new Cabinet!

What did Bruce Forsyth say when the Christmas pheasant repeated on him? “Good game, good game!"

Why did Jeremy Corbyn ask people not to eat sprouts on Christmas Day? He wants to give peas a chance!

What does Donald Trump do after he pulls a cracker? Pays her off!

Why has Debenhams been forced to cancel its Christmas nativity play? No prophet!

Why has Boris Johnson bought mistletoe this year? Because he’s tired of being in the single market!