Navigating the Branches of a K-Shaped Recovery 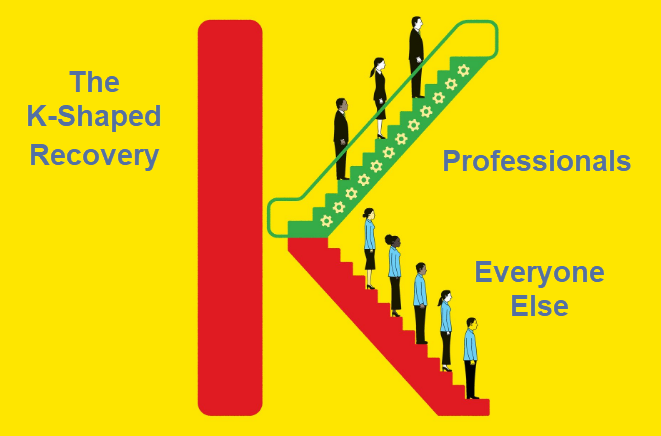 OCTOBER 6, 2020: A Wall Street Journal piece today encapsulates my best guess about the future the U.S. economy. It outlines a “K-shaped” recovery with one branch climbing skyward and the other heading down.

Not that anyone should care about my best guess. Six months ago today in this newsletter, I expressed this expectation:

“I believe Denver has shifted from a seller's market to one more in favor of buyers. I am bearish about home prices. I hope I am wrong. But how can prices not decline?”

When I read those words now, I cringe.  How could I have been so wrong?

Denver real estate has in fact taken off, starting a month or two after that commentary.  There are several reasons.  Low interest rates.  Pent up demand after the slow months.  A shortage of good listings, with many people preferring to stay where they are.  Which translates to fewer sales but higher prices.

I cringe not just for having been so wrong.  It’s because maybe I’ll still turn out to be right.

Unemployment is at record highs.  Small business are closing left and right.  Big businesses are busy laying people off too. Millions of residential mortgages are delinquent.

Health officials warn us of a second wave (or a third) of the virus.  Schools and workplaces are shut down.  They’re playing baseball in front of cardboard cutouts.

The recovery has been fueled mainly by funny money.  The Federal Reserve has printed some $9 trillion in in bailouts of various kinds.  About 22 percent of all the dollars ever created (going back 200 years) have been printed this year.

To me, more dollars means less value per dollar. Own just about anything else (stocks, real estate…) and you’ll be better off.  Asset prices will stay strong because, who wants to trade them for Monopoly money.  Right?

This is the very definition of inflation.  Too many dollars chasing too few goods.  But does Consumer Price Inflation necessarily track real estate price inflation?  I don’t know.  You can envision a scenario where people can’t afford expensive homes because they’re struggling to pay their grocery bill.

What happens when the Fed pulls away the punch bowl?  (Eventually they have to stop printing money, right?)  Do investors then pull the plug?

Stocks opened strong today, Monday, October 6.  Mid-day, Trump tweeted that no more stimulus checks would go out until after the election. The market dropped like a rock.  Which suggests to me that: 1) the markets love the stimulus (obviously); and 2) Trump is the expected winner, at least among stock investors.

But the popular polls tell another story.  With the election four weeks away, it appears Biden has a double-digit lead.  What happens if those polls turn out right?  Do the markets tank due to disappointment?

I am about real estate, not stocks.  But I believe stocks are often a harbinger of what’s to come in real estate.  Stocks react quickly to events, unlike real estate.  Sometimes you can actually connect specific moves to specific catalysts. Likes Trump’s tweets.

Stocks hit a multi-year bottom in 2003. They rose for a few years, and then hit their ultimate bottom in 2009.  Real estate lagged behind the stock market during the first part of that period, first rising and then ultimately bottoming out, along with stocks, in 2009.

What’s next for real estate? I watch the stock market very closely.

I once interviewed the late, great Oklahoma oil man, T. Boone Pickens. He said, “I’m no economist, but I’m a pretty good parrot.”  His thoughts were mere repetition of what he’d heard from people more knowledgeable.  Such was his modest claim.

I’m no T. Boone Pickens, but I’m a decent parrot as well.

I follow (and often parrot) a popular YouTube real estate guru named Kevn Paffrath.  Through his “Meet Kevin” vlog, he argues that a crash is not imminent.  High home prices are largely due to low interest rates.  He recites a “Rule of Ten,” saying every one point drop in rates causes a 10 percent gain in home prices.

Bearish real estate gurus also abound on the internet.  One is Ray Dalio, a billionaire hedge fund founder whose unequivocal message is that “Inflation is Coming.”  Another is Robert Kyosaki, author of “Rich Dad Poor Dad.” His prediction for the country is more dire: “We’re going to go broke.”  On a nationwide scale, I’m not even sure what that means.

One point seems to be common to bulls and bears.  That is, we will live in a bifurcated world of rich and poor.  The haves and the have nots.  This is not about the ultra-wealthy and everyone else, which is a real thing.  It’s about a division within the middle class, where some will live in relative comfort while others struggle to put food on the table.

We’re already seeing this, right?  Some people are “working from home” with uninterrupted income. Others are panicked over what happens when the stimulus checks dry up.  It is the K-shaped recovery. For some it is not a recovery at all.

I don’t have all the answers.  Anyone who speaks with certainty about our economic future, in my opinion, is exaggerating their expertise.  As a real estate agent, my job is to keep clients on the right side of the bifurcation that will divide America.  And I still believe real estate, purchased wisely, for most people, is a key to long-term wealth.