Trust Me: How to Short-Circuit Corner Cutting 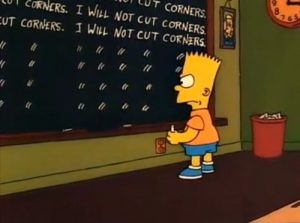 Recently I re-read a non-fiction book titled “House,” published in 1985.  It is by Tracy Kidder, an award-winning author who is still writing at age 74. I read the book in the late 1980's. Kidder documented the conception, design, and construction of a single-family house near Amherst, Mass.

It is a great character study of a young family buying its first home; a passionate 40-year-old architect and former attorney designing his first project; and four ex-hippie carpenters who would spend six months hammering the house together.

One simple idea from the story installed itself in my head a few decades ago, and never left. First some necessary background.

After some spirited negotiations, the contractors proposed to build the house at for $146,660.  (Today’s equivalent of a 1983 dollar is about $2.50. So multiply that figure by 2.5 for perspective.)

It was a lot of money to all concerned. The contractors considered it a fair price, allowing them a tiny margin of error and a decent profit in the end. They were already invested in the project, after two weeks of planning and discussion. That effort would earn them no compensation if a contract wasn’t signed.

The husband of the homebuying couple was an attorney named Jonathan Souweine. He was generally an agreeable sort, but no stranger to haggling.  The proposed price of $146,660 seemed odd. Why not a nice round figure of $146,000? Knock off the $660 and we’ll have a deal.

That didn’t sit well with the builders. Our proposal represents exactly what the job is worth, they said. Their own “sunk costs” were known by both sides. They felt the attorney was exploiting their good will for personal gain. The debate volleyed back and forth until the contractors capitulated. They would do the job for $146,000.

The Souweine house in Amherst, Mass

Ground was broken and construction began. First the foundation, then the framing. It was a race to beat the bad weather with an October 31st deadline.

All along, one annoyance stuck in the craw of one of the carpenters, named Jim. They’d taken a $660 beating, and for what?  Yes, it was less than one half of one percent of the contract price. Still it festered like an open sore. It was them or us making up the gap, he figured. Why not them?  Our price was fair.

One day Jim was sorting through boards at a lumber yard. It was No. 2 grade pine lumber and some of it had knots. A knot from a live tree branch, Kidder explains, may show through the paint when the board is installed. But the board will remain intact. A knot from a dead branch will eventually become a hole.

Nothing in their construction contract addressed lumber quality. Jim had spent more than an hour sorting. The pickings had grown slim and he settled for a few boards with knots (the live branch kind). He figured he’d met the call of duty and that was as far as he’d go.

“There’s your six-hundred and sixty dollars,” he muttered to no one in particular. Soon the boards were installed in the cornice of the house exterior, above the front door, in plain view. The architect noticed a small knot and was not happy.  But the imperfection had to be tolerated.

I don’t know what price was fair to build a 3BR house in western Massachusetts in 1983. I do know all parties signed $146K contract and no one put a gun to anyone’s head. But resentment lingered in the mind of one builder.

In that instance as in so many others, opportunities to cut corners are everywhere. Would the foundation be square? Would the house footprint be properly backfilled? Would the concrete be sufficient tamped and compacted? Would all the wiring connections be tight? Would the plumbing be secure even in out-of-sight spaces? Would the sewer pipe be undamaged during installation?

Yes, there are code inspectors. They are like traffic cops. They will catch tje worst violations. But most of what’s important is hidden.

The house turned out beautifully. The owners had no complaints. The author believed the builders were highly principled and not inclined to cut corners. I say, who really knows?

The LaRocque house in Golden, Colo.

What has stuck with me since the 1980's is this: It is more important to be trusted, respected, and if possible liked—by your contractors, business partners, and service providers—than to beat them out of a few dollars. There are too many ways for them to avenge a perceived slight.

I am now the house business myself. I’ve constructed a couple of new-builds and rehabbed and resold a few dozen. My main gig now is broker work, representing sellers and buyers.

When I am the provider (not a consumer) of services, building trust is as important as building anything else. I’ll go out of my way to do that.  A weekly activity report to a seller, for example, is a way to prove we are not lounging around. If the compensation for my effort isn’t enough, we don’t take the job.

Discount brokers operate in a different realm. They promise superior service at a low price. They pray for an easy deal.  But if the going gets tough? Suppose your listed home has attracted multiple offers. Does your broker bring them all to your attention? Or do they press the easy button and only show you the one most likely to close?

So many ways to cut corners. We must constantly re-learn the obvious. It is all about trust and integrity.